The macro trends forcing change on the investment management industry 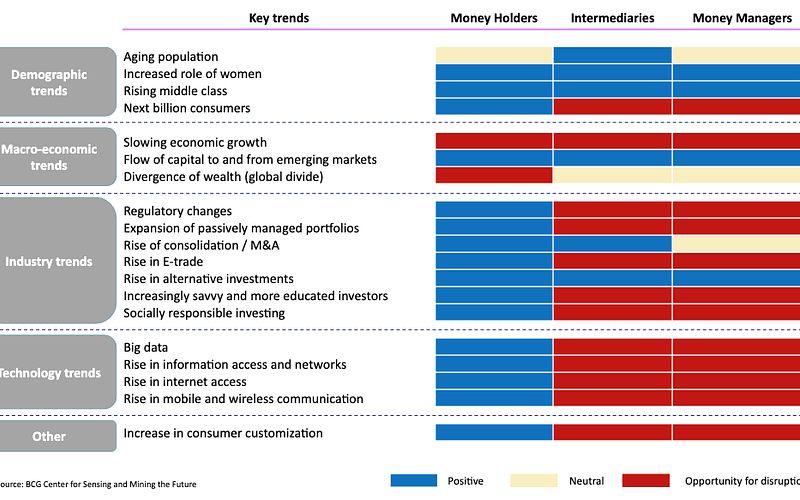 David Teten is founder of Versatile VC and writes periodically at teten.com and @dteten.
More posts by this contributor
Katina Stefanova
Contributor

Katina Stefanova is CIO and CEO of Marto Capital, a multistrategy asset manager based in New York that creates customizable investment solutions for institutional clients.
More posts by this contributor

Power in the investment management industry is shifting to the money holders from money managers, driven by several major economic, social and political trends.

A new group of underserved customers

Women in the U.S. are expected to control as much as $30 trillion in assets over the next three to five years, and millennials $20 trillion by 2030. The new decision-makers will expect the industry to reflect better gender balance and be more accessible.

Women and millennials tend to invest differently than the past generation of older men. Millennials are both more risk averse and more socially conscious when selecting investments. In addition, because they came of age during the financial crisis, millennials have a negative perception of some of the traditionally dominant financial services companies. The change in the values of the investor base helps explains the popularity of ESG investing. 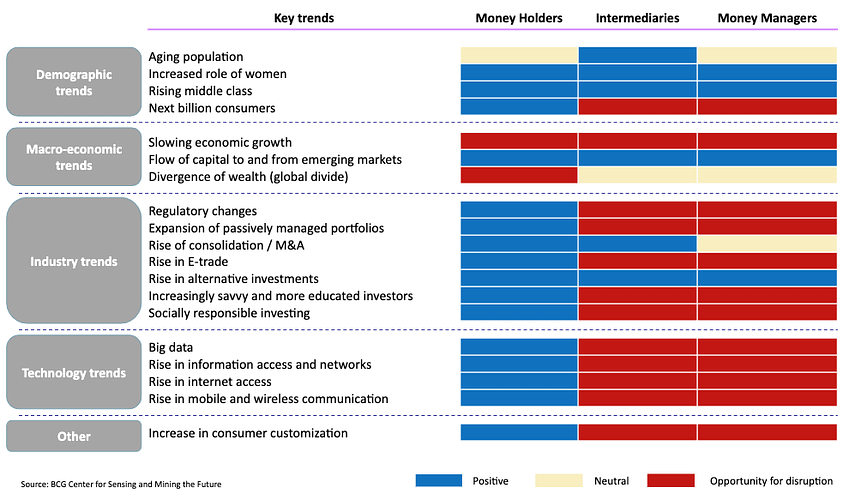 Image Credits: BCG Center for Sensing and Mining the Future

Additionally, allocators are becoming a lot less tolerant and unwilling to turn a blind eye toward toxic cultures of sexual harassment and discrimination, which have been tolerated at some largely male-led investment managers for years. Our view is that as the culture and preferences of allocators change, so will their investment criteria and the tolerance for bad behavior.

VCs tout our industry as frontier technology investors, but many of us are using the same infrastructure tools we have used for the past 20+ years.

Millennials are, “inherently distrustful of authority so the traditional financial adviser model is not going to work for them,” said Suzanne Ley, formerly head of financial institutions at Westpac. “They demand complete transparency in all aspects of their life, so hidden/opaque fees structures are not going to be tolerated. They also have a high propensity to move jobs more frequently than past generations, so the portability of financial assets is going to be very important going forward,” she added.

Political volatility is not good for savers and allocators, as it tends to destroy asset value. The new cold war between the U.S. and China is ideological in part, but it is also in large part about technology dominance and cybersecurity.

The new cold war has only increased the movement of capital to regions of relative stability. The fear of totalitarian regimes or anarchy in China, Russia, the Middle East and South America has millions of well-educated and wealthy citizens looking to protect themselves and their nest eggs. We are seeing the first net private capital outflows in emerging markets due to “risk-off” sentiment and risk of rising rates in the U.S. and Europe. Even though the economic outlook in the U.S. is negative and the COVID-19 response inadequate, the country remains relatively stable. Together with places like Switzerland, Singapore and the U.K., the U.S. remains an attractive safe haven.

Pension funds and wealth management funds have a big opportunity in growing their footprint geographically. While traditional markets in Europe, the U.S. and Japan are saturated, India, for example, provides the perfect environment for the growth of a new wealth management industry. A combination of a strong middle and upper-middle class, well-educated professional class, a free-market economy and expansion of disposable wealth will drive demand for wealth management products, both in the institutional and retail spaces.