There was a mixed reaction among the TechCrunch staff when Sony’s WH-1000XM4 were announced the other week. There was excitement among those looking for new headphones and disappointment for those who’d recently purchased a different pair. The product’s predecessor are pretty universally regarded as some of the best over-ear headphones you can get for the price point, so the biggest question, really, was what the new ones bring to the table.

So let me just say this off the bat. If you own the WH-1000XM3, congrats. You purchased a very good pair of headphones — ones that rightfully helped unmoor Bose from its long-standing position as the default frequent traveler purchase. And no, you don’t need to rush out and upgrade if yours are still hanging in there.

The original headphones entered the world pretty fully formed, and after two years, this refresh is more of a refinement of an excellent product. But the additions do go a long ways toward maintaining Sony’s spot as the reigning champion of noise-canceling, over-ear Bluetooth headphones. The 1000XM4 are hard to beat.

The new headphones more or less look exactly the same as their predecessors. They’re not the most striking pair of over-ear headphones for your money (that award may well go to Sennheiser or Bang & Olufsen). I appreciate the relative simplicity versus the comparable Bose Quiet Comfort model. Honestly, when it comes to things like long-haul flights, the less flashy, the better.

The headphones are surprisingly light — something I noticed the first time I had the opportunity to try the M3 during a meeting in some board room with Sony execs a couple of years back. The new units have a bit more padding and are extremely comfortable. I say that as someone who has a tough time with over-ear headphones for whatever reason. As I write this, I’ve been wearing the headphones for the better part of four days. 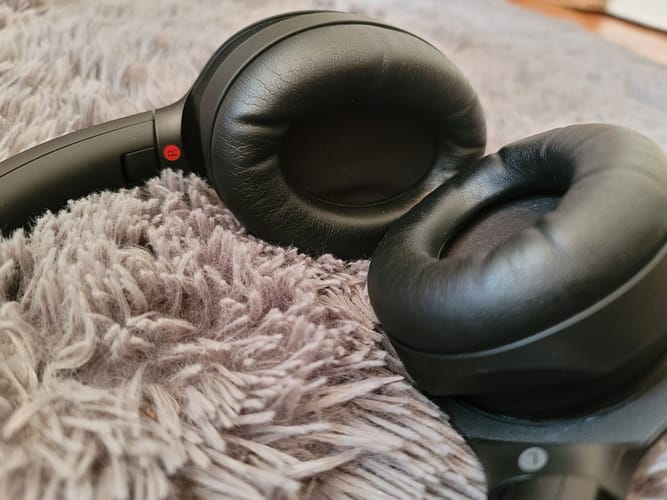 There have been breaks in the marathon, of course. The nature of the form factor means they’re not really ideal for, say, going for a walk or falling asleep. The former is especially the case of late here in New York, where it has routinely hit temperatures in the 90s. For noise canceling all of the annoyances of home, however, they’re terrific. And when we all start flying in planes again, they’ll be excellent for that, too (thanks in no small part to the inclusion of a 3.5mm headphone jack for that seat-back entertainment).

The other element that has allowed for nearly uninterrupted usage is the ability to pair the system with two devices simultaneously. This has, frankly, been a big pain point for a number of headphones I’ve been using of late, requiring the user to get into the device settings and manually select the headphones. Using the iOS app, I paired the M4 to my phone and desktop top, and I’m able to switch seamlessly between sources. You’d be surprised by how liberating that feels. Just make sure your sound level is comparable on each device or you’ll be in for an unfortunate blast.

Like the M3, the sound quality is excellent, offering a full audio picture, regardless of genre. The sound is honestly pretty comparable to the previous model, and that’s perfectly fine. Nura’s truly excellent sound profile technology retains the top spot for me, but these new Sonys offer excellent audio for a pair of everyday headphones.

Once again, the real centerpiece, however, is Sony’s truly excellent noise canceling. The feature was the M3’s real secret weapon against Bose dominance in the category. The new models take things up a notch by detecting ambient sound some 700 times per second via the system-on-a-chip and actively adapting to counteract this. The system also features the addition of Noise Canceling Optimizer. On the face of it, the feature works similarly to noise optimization on other systems. Hold the button down and it sends an audio signal into your ear, meowing things like seal quality and atmospheric pressure (for planes, primarily) to offer up a more customized found profile. It adds up to some truly excellent noise canceling and an overall great audio experience.

There are a bunch of other nice features throughout that may or may not be helpful in your specific scenario. For instance, I found myself  immediately disabling Speak to Chat, which pauses playback when you speak. A nice feature in theory, but I live alone, so the only time it would trigger is if I coughed, laughed or unconsciously found myself singing along to the music. More useful for my own needs however is a feature that lets in ambient sound when you cover the right ear cup with your hand. Ambient sound fed into headphones through a mic still sounds a bit unnatural, but it does the trick.

I also found myself turning off location tracking, because, quite frankly, enough of my gadgets already know where I am. Also, the addition of noise that adapts based on familiar locations is nice, but not really worth the trouble for me — especially these days when I’m leaving my apartment significantly less than I’d care to admit. And besides, I just really don’t like seeing that location tracking icon in the corner of iOS 11.

Google Assistant and Alexa are built in, as well, but again, not features I tend to use much in a pair of headphones. I’d say I shut them off to save battery, too, but with a stated life of 30 hours, I’ve honestly been fine on that front. Charging via USB-C, meanwhile, will get you an impressive five hours of playback in around 10 minutes.

At $350, they’re priced the same as their predecessors — which is to say, they’re not cheap. But you’d be hard pressed to find a better pair of wireless over-ear headphones in their class.