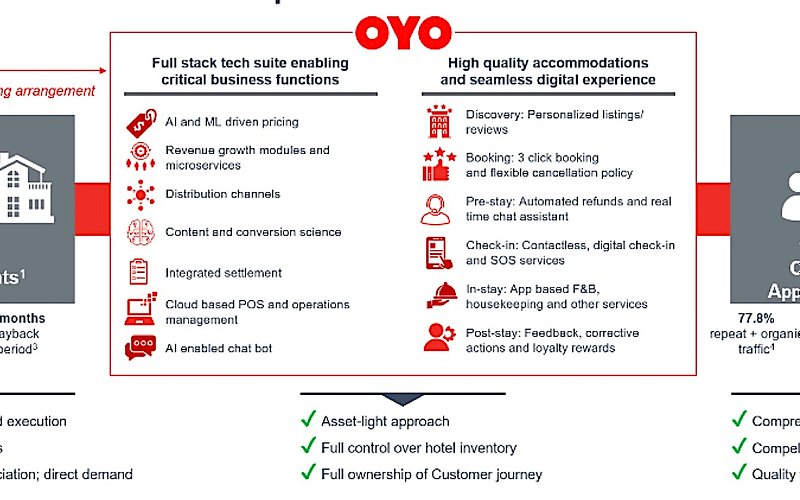 Oyo is ready to explore the public markets. The eight-year-old Indian budget hotel giant has filed the paperworks (PDF) with the local market regulator for an initial public offering, in which it is seeking to raise about $1.16 billion.

The Gurgaon-headquartered startup — which offers an operating system of sorts to help hoteliers accept digital bookings, payments, determine the best pricing for a room, and integrates with third-party booking services — is seeking to raise about $942 million through sale of new shares, while the rest is set aside for sales of existing shares (secondary transaction).

SoftBank plans to sells stake worth over $175 million, Oyo said in the filing. The startup plans to deploy over $330 million to repay its debt. Oyo recently raised $660 million in debt.

The startup — which counts SoftBank, Airbnb, Lightspeed Venture Partners, Sequoia Capital India, and Microsoft among its investors and was most recently valyed at $9.6 billion — has not offered a ton of other details about what it is looking for from the retail investors, but here’s what we know: as we reported earlier this week, Oyo is seeking a valuation of over $12 billion in the IPO. And the startup’s young founder — Ritesh Agarwal — doesn’t plan to sell his shares in the public offering.

The filing today marks a major turnaround for Oyo that grew too ambitiously in international markets in recent years but corrected course by hitting brakes on some of those efforts.

Much like every other hospitality and travel firm, Oyo was also severely disrupted by the pandemic. At one point, the startup reported that its business was down by up to 60% as several nations enforced lockdowns as they scrambled to contain the spread of the virus.

In the financial year that ended in March this year, Oyo posted a revenue of $559.8 million, down from $1.8 billion from a year prior, and $877 million the year before.

But it has been showing signs of fast recovery in recent weeks as some of its key markets opened up in recent quarters. The startup said in the filing today that four markets — India, Indonesia, Malaysia, and Europe — account for about 90% of its overall revenue.

Oyo has also streamlined its relationship with hotels in recent quarters. The startup today doesn’t own any hotel of its own and instead works with over 157,000 partners and helps them operate hotels, resorts, and homes. It doesn’t promise any minimum guarantees to those partners.

The story of Oyo — in which currently SoftBank has over 45% ownership — starts with Agarwal, who left his rural town in search of a better education in Rajasthan. He often visited his friends in Delhi and stayed at their houses or rented cheap hotels. That’s when Agarwal, then in his late teens and a recent college dropout, spotted a budget hotel that was struggling to fill its rooms each night.

Agarwal then, he has said in the past conversations, convinced the hotelier to broker a deal to let him renovate the hotel and started marketing it to businesses in exchange for a cut of future commissions.

That deal immediately proved to be a success, which then propelled Agarwal to explore broadening his offering — now using technology — to focus on what were the neglected segments of the market.

That’s the beginning of Oyo, which immediately found success and soon enough attracted the attention of a fellowship run by the foundation of PayPal co-founder Peter Thiel.

Oyo first assumed the market leading position and then started to expand — beginning with Southeast Asia, Europe, China, and the U.S., to name a few markets. Its aggressive expansion bet has had a mixed success rate. It’s doing well in Europe and Southeast Asia, but making inroads in China and North America have proven to be more difficult than the startup likely assumed.

At the height of that expansion, Agarwal, 27, invested $700 million into the startup. That year, he announced that he was planning to spend $2 billion through an entity called RA Hospitality Holdings to raise his stake in Oyo to 30%, from 10% prior to the $700 million investment. The filings show that now Ritesh and his other holdings companies own about 32 to 33% stake in Oyo.

Oyo said in the filing that its app has been downloaded more than 100 million times and 70% of its workforce lives in India. As of December 2019, it said in the filing, the startup viewed its total addressable market opportunity as serving 54 million short-stay storefronts.

“In India, Indonesia and Malaysia, OYO-powered hotel storefronts that joined the platform in 2018 and 2019 performed better than independent hotels of similar sizes in India, Indonesia and Malaysia respectively in 2019 on average. After 12 weeks of joining the OYO platform, OYO-powered hotel storefronts generated 1.5 to 1.9 times more revenue on average compared with the average revenue estimated at independent hotels of a similar size in India, Indonesia and Malaysia in 2019. In Europe, OYO-powered home storefronts earned an average of 2.4 times more revenue in 2019 compared with the average revenue estimated at an independently managed home in Europe in 2019,” it said in the filing.

Two interesting slides from the filing that offer an insight into Oyo’s business:

Catherine Shu contributed to this story.