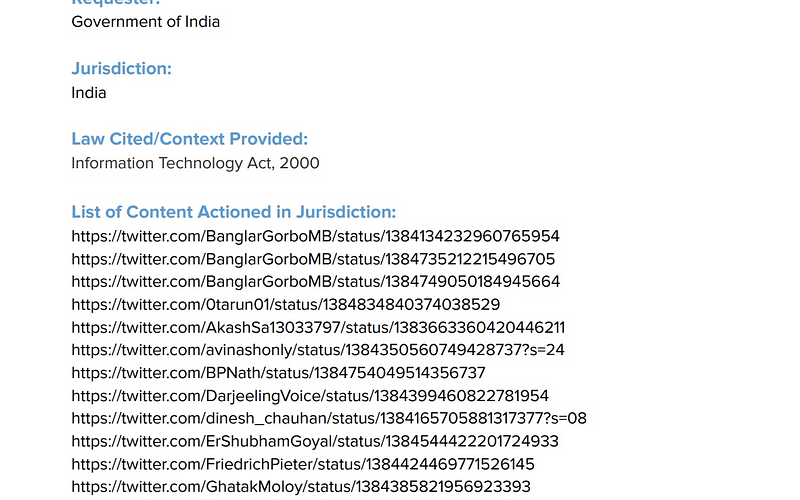 Twitter has taken down dozens of tweets in India, some of which were critical of New Delhi’s handling of the coronavirus, to comply with an emergency order from the Indian government.

New Delhi made an emergency order to Twitter to censor over 50 tweets in the country, Twitter disclosed on Lumen database, a Harvard University project. The social network has complied with the request, and withheld those tweets from users in India.

India, which has also previously ordered Twitter to take down some tweets and accounts critical of its policies and threatened jail time to employees in the event of non-compliance, comes as the country reports a record of over 330,000 new covid cases a day, the worst by any country. News reports suggest that even this number is underreported.

Amid a collapse of the nation’s health infrastructure, Twitter has become a rare beam of hope as people crowdsource data and help one another find medicines and oxygen cylinders. 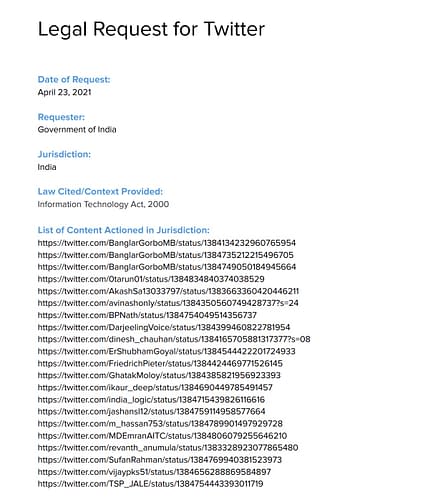 A copy of one of Indian government’s orders disclosed by Twitter. (Lumen database)

Medianama, which first reported on New Delhi’s new order, said among those whose tweets have been censored in India include Revanth Reddy (a Member of Parliament), Moloy Ghatak (a minister in West Bengal), Vineet Kumar Singh (actor) filmmakers Vinod Kapri and Avinash Das.

In a statement, a Twitter spokesperson said, “When we receive a valid legal request, we review it under both the Twitter Rules and local law. If the content violates Twitter’s Rules, the content will be removed from the service. If it is determined to be illegal in a particular jurisdiction, but not in violation of the Twitter Rules, we may withhold access to the content in India only. In all cases, we notify the account holder directly so they’re aware that we’ve received a legal order pertaining to the account.”

“We notify the user(s) by sending a message to the email address associated with the account(s), if available. Read more about our Legal request FAQs.  The legal requests that we receive are detailed in the bianual Twitter Transparency Report, and requests to withhold content are published on Lumen.”