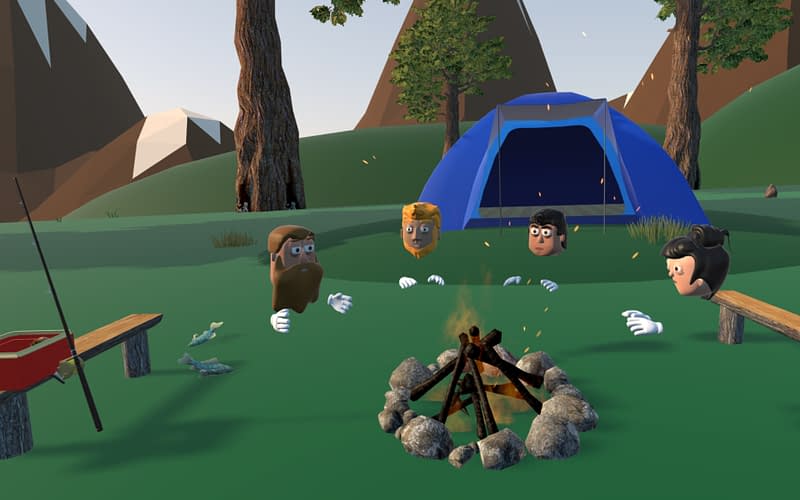 The tech buzzword of the season is “metaverse.” Facebook kicked the craze into high gear at its Connect conference in late October, featuring an hour-long image-rehabilitation video where Mark Zuckerberg revealed the company’s new name, Meta, and showed off a Another page for the Piano House NFT, which has since been removed, showed 3D renders of an entirely different property, LINE Architects’ Piano House.

Reid has a clear modus operandi when it comes to advertising MetaWorld: find other people’s images and videos of impressive Unreal Engine environments, edit out the original watermarks, and present them as his own. Meanwhile, Reid has never provided any evidence that MetaWorld has ever looked like any of these assets.

This entire land-acquisition model dates back to the 2003 game Second Life and has recently been popularized in NFT form by Decentraland and similar platforms, with Decentraland’s virtual economy valued in billions of dollars. When it comes to the Esselen NFTs, the issue is that as far as we can tell, the MetaWorld Reid’s been promising has never existed at all.

In that Clubhouse monologue on November 5th, Reid claimed MetaWorld was already live, and had been for a few years.

“The other unique aspect of this world is the sheer size of it,” he said. “It exists in the cloud. We pushed it to cloud a couple years ago, and it’s been kind of living and breathing on its own. There’s sort of an AI operating system, if you will, kind of a world-operating system that manages the world and generates the land.”

This differs from the messaging Reid provided in interviews with Engadget. Reid had difficulty answering standard questions about the revamped MetaWorld, including how the project was being funded, what he’d actually built, where it was hosted, how he planned to sustain this massive world, and how many players he had.

After saying he was “not sure” how many players were active in MetaWorld, I asked, “Like dozens of people, hundreds of people?”

“So, I don’t know,” Reid said, before talking for a few minutes about the scope of the project, repeatedly calling it a “moonshot” for his main company, HelloVR. HelloVR seems to exist mainly as a LinkedIn page, with Reid and “Meta Bot” as the only two employees. Reid is listed as CEO. Reid in our interviews has said he works alone with contractors but also recently claimed to have a “partner.”

When confronted with the misleading nature of his assets or the discrepancies in his pitch, Reid responded with a singular argument: This was just another example of racism in the technology industry.

Reid isn’t wrong that the technology sector is dominated by heterosexual, cisgender, white men, and the industry has only recently begun recognizing and reckoning with this imbalance. That’s one of the reasons I was initially excited to interview Reid all those years ago; he was a Black developer in VR and his project sounded amazing. Only once I started asking questions, a lot of Reid’s ideas didn’t add up. And now he’s back with the same approach, but he’s specifically targeting people of color, which he knows is an underserved community.

“It doesn’t sit right with me that he’s selling this as being a ‘Black-owned’ project,” Morgan said. “I have this terrible feeling that he’s using that to try and protect himself from backlash, because anyone who would go to attack him there could be labeled as racist.”

On Clubhouse and Discord, Reid regularly presents himself as a hyper-intelligent tech entrepreneur with ideas guaranteed to change the world. In interviews with Engadget, however, he acts confused by basic concepts like YouTube uploads, copyright and IP theft.

“If they come across as disingenuous, oops!” Reid said about his YouTube history. “Like, all right, but that wasn’t the intent, we can sort of learn from that. The last thing we want to do is like, piss a bunch of people off.”

The original MetaWorld server is filled with people who could be accurately described as “pissed off.” Many of them bought land the first time around and ended up requesting refunds, citing Reid’s inconsistent messaging and lack of results over a period of years.

One investor who asked to remain anonymous, called Kris here, said they joined MetaWorld in 2018 because they loved VR and wanted to support small, innovative developers. Kris spent at least $60 on virtual land and defended Reid in the original Discord server until the day he disappeared.

“The vision of sharing an open world with people who want to build something big catches me every time,” Kris said. “It would be so great if a game comes that includes what MetaWorld promised. …We planned a whole city, we were very deep into this and really hoped that we could someday visit … but after a while a lot of people asked for refunds, day after day, with no response from Dedric. After he wrote that last message there wasn’t a Dedric anymore, and all hope was gone.”

Another investor who asked for anonymity, whom we’ll call Ryan, joined MetaWorld as an escape from their real-world anxieties. Ryan is disabled, and saved for a VR headset before discovering MetaWorld in 2018.

“I was looking desperately to find something to just change the boredom of life,” Ryan told Engadget. “My life sucks. I’ve got a heart failure complicated with a bunch of other stuff right now, and I just can’t get out and do things in the real world.”

Ryan shared receipts of all of their purchases with Engadget, alongside chat logs with Reid and an account called “Metabot,” which was controlled by Reid at least part of the time. Both reassured Ryan over the course of several months that all was well with MetaWorld.

“At first, even though I was concerned, I was still hoping that the project would happen,” Ryan said. “I tried to be patient.”

In total, Ryan spent almost $300 on passports, land, property and virtual currency. They never directly asked for a refund from Reid. By the time Ryan thought to do so, they saw multiple people had tried and failed to get their money back, and it didn’t seem worth the stress.

“I felt like I had been scammed, and was embarrassed,” Ryan said. “Due to the nature of a scam, I didn’t feel that there was a point. I was not getting answers in DMs … so I just gave up.” Ryan later heard from another community member about Somnium’s refund offer, and recouped his money from that company.

“Dedric and his group, I don’t know who’s responsible, mostly it bothered me a lot because they took advantage of me,” Ryan said. They continued, “They apparently don’t care for anybody except themselves … I lost a little faith at that time.”

These days, Ryan said they only use their VR headset for Beat Saber exercise, but they’ve found some friends and community in the MMO Dual Universe.

In a five-hour Discord call with the MetaWorld community in September 2018 (yes, five hours), Reid dodged probing questions from investors and made more bold claims. For one, he said MetaWorld was on track to launch in beta at the end of the summer, which was just three days away. A few callers chuckled and made snide comments at this goal, clearly in disbelief.

“Yeah, we’re pushing for it to start next week,” Reid responded. “What’s so funny about that?”

MetaWorld did not go live at the end of that summer. Of all the investors we spoke with, none of them received a refund from Reid.

As it stands in 2021, Reid still doesn’t seem to understand why anyone from the original round would want their money back, and he remains confused by the definition of “a refund.” This is years after Somnium Space facilitated refunds to some angry MetaWorld backers.

“This narrative of like, there’s been anything disingenuous, is like nonsense, right?” Reid told Engadget this year. “It doesn’t make any sense. Like, that doesn’t necessarily fit into, as a leader of the project, my narrative, right? So like, yeah, so there’s a lot of confusion around like, what a refund is. But like, the whole concept of refund was created by the folks over at Somnium.”

“I’m still mad about the whole thing, that one guy can do a scam on the web without consequences, it looks like he doesn’t even care,” Kris said. “Just think about some kids pumping their money in there for nothing, just an old man doing scams. That’s pretty sad.”

Reid is currently pitching the vague idea of MetaWorld on Clubhouse, Discord, Twitter and YouTube, and he said people are buying in (though exactly how many, he’s not sure). His NFT marketplace full of misappropriated assets is live, and so far, he’s raised more than $11,000. It’s impossible to know how much Reid made from the initial backers, but at its height the first MetaWorld Discord had around 2,000 users, according to an ex-moderator we spoke with.

A Trello board linked on the new MetaWorld site serves as a roadmap for development and NFT drops, and current goals include a “land client” due February 14th, 2022, and “social simulation testing” due March 2022, complete with “Spatial OS Unreal Engine 5 support pending.”

Improbable, the company that runs SpatialOS, has no idea what Reid means by this claim. In a statement to Engadget, Marine Boulot, Improbable’s VP of PR and Communications, said, “Improbable has never had a commercial relationship with HelloVR/MetaWorld … neither HelloVR nor MetaWorld have any right or licence to use SpatialOS beyond any legacy prototyping kits they might have had access to years ago.”

Put simply, Reid does not have access to SpatialOS to build the game as he’s selling it.

It doesn’t end there: The quotes attributed to Engadget on the MetaWorld website and Reid’s Clubhouse profile are fiction. One of them is credited to a writer that’s never worked for Engadget.

The original MetaWorld Discord server is still active — more active than the new, official one, even — and it’s filled with folks looking for closure and a way to warn potential investors about the lies they say they’ve encountered in Reid’s universe. Reid never shut down that server, saying he was hacked and lost access to the email account associated with it years ago, and adding that Discord had ignored his request for assistance.

A former member provided proof that Reid had access to his MetaWorld email account in April 2020, seven months after he last posted in the Discord server. At this point, that’s barely a surprise.

“He promised us this special, unique world where anything was possible,” Morgan said. “That we could build out our dreams in this place with no limits… and then just took our money and lashed out when we asked for updates or help. We were promised villages and towns with our own governance, that we could have full control over our collectives. I was really looking forward to making that persistent safe space where anyone was welcome.”

That seems to be exactly what the people in the new MetaWorld server want, too.

For now, it’s a tale of two servers, with a vast digital paradise hanging in the balance — or not, depending on which channel you’re in.

Additional reporting by Aaron Souppouris, Executive Editor, and Nick Summers, who was a Senior Reporter at Engadget until early 2021.