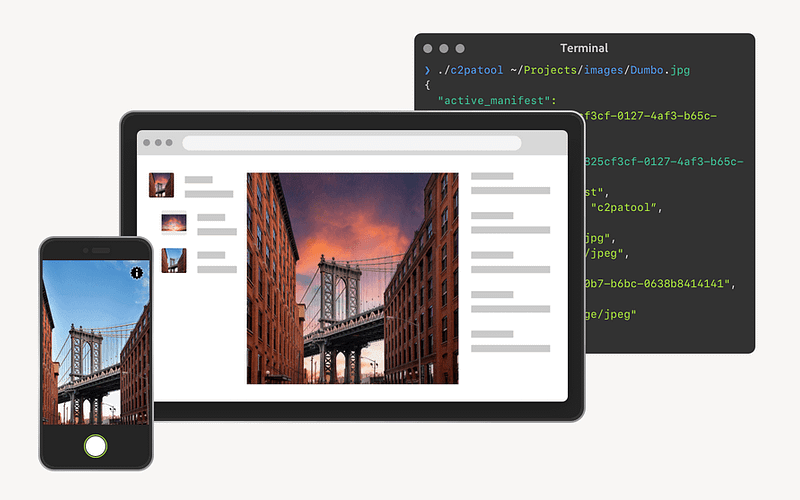 Adobe has a vision for an internet peppered with photos and videos packaged up with extra data about where they came from. The company’s central aim is to mitigate the spread of visual misinformation, but the system could also be a boon for content creators keen to keep their names attached to their work.

First announced in 2019, Adobe’s Content Authenticity Initiative (CAI) project has since released a whitepaper on a technology to do just that, introduced the system into its own software and partnered up with newsrooms and hardware makers that could help universalize its vision.

Now, the company is announcing the release of a three-part open source toolkit to quickly get the technology into developers’ hands and out in the wild. Adobe’s new open source tools include a JavaScript SDK for building ways to display the content credentials in browsers, a command line utility and a Rust SDK for creating desktop apps, mobile apps and other experiences to create, view and verify embedded content credentials. 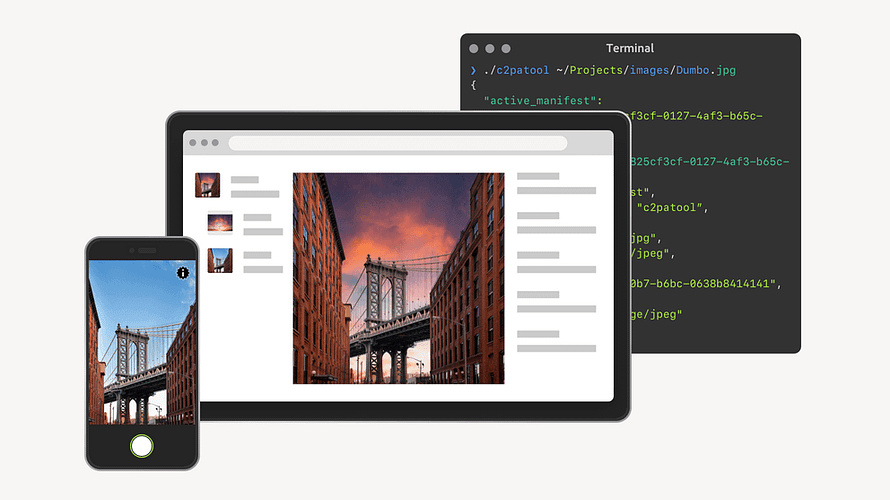 As EXIF data stores details about aperture and shutter speed, the new standard also records information about a file’s creation, including how it was made and edited. And if the company’s shared vision comes to pass, that metadata, which Adobe refers to as “content credentials,” would then be widely viewable across social media platforms, image editors and news sites.

“Detection [for misinformation] is going to be an arms race, and, you know, frankly, the good guys will lose,” Andy Parsons, Senior Director of Adobe’s Content Authenticity Initiative (CAI), told TechCrunch. “We endeavored instead to double down on content authenticity, which is this idea of proving what’s real, how something was made, in cases where it makes sense, who made it.”

The underlying standard, C2PA, is the result of a collaboration between Adobe’s CAI and partners including Microsoft, Sony, Intel, Twitter and the BBC. The Wall Street Journal, Nikon and the Associated Press have also recently joined Adobe’s commitment to make content authentication widespread.

With the new tools, a social media platform could plug in the Adobe-provided JavaScript and quickly have all of its images and videos displaying the content credentials, which appear as a mouse-over icon in the upper right corner. That implementation could take a couple of developers a few weeks instead of requiring a dedicated team and a larger software buildout.

The CAI’s core goal is to counter visual misinformation online — think recirculated old images distorting the war in Ukraine or the infamous Nancy Pelosi “cheapfake.” But a digital chain of custody could also benefit content creators who have their work stolen or put up for sale, a phenomenon that’s plagued visual artists for years and now is causing headaches in NFT markets.

Parsons noted that the CAI is also receiving a surprising amoutn of inbound interest from companies producing synthetic images and videos. By embedding origin metadata into the kind of AI creations we’re seeing out of models like DALL-E, companies can be sure those generative images aren’t easily mistaken for the real thing.

OpenAI’s new DALL-E model draws anything — but bigger, better and faster than before

While the C2PA standard can be likened to something like EXIF, Adobe says that the new content attribution standard is much less “brittle” in terms of tampering with or breaking the attached information. Through a verification site Adobe launched last year, anyone can drag and drop an image with content credentials to verify that they are legitimate. And even if someone breaks the embedded data, it can be re-attached through image fingerprinting techniques.

Adobe’s vision for authenticating online content is expansive, but it remains realistic about the limits of the project. People with bad intentions will always find a way to mislead others, but the company hopes that a good chunk of average internet users will be open to being presented with more information about what content they can trust online.

The company is also hopeful that the more adoption that the standard sees, the more momentum will build for image-heavy social media platforms to implement it, even if they’re resistant at first. Flickr, for example, has long displayed EXIF data alongside each image, but Instagram and most other modern image-based social networks strip out metadata, even as some of them prompt users to add location tags back in.

Getting social platforms on board begins with convincing those companies to keep the content credentials intact. “Once applications and websites and platforms start preserving it, then you know, downstream consumers who might download something off the Instagram website, or who might share something on WhatsApp will know that the data exists,” Parsons said. “And then we think it’s a matter of time, as a matter of that snowball effect, so that folks will show it. There’s really no downside.”

The company is investing in education around content authenticity and visual misinformation but is moving quickly to law a groundwork for widespread adoption — and that’s something Adobe has a long track record of doing with ubiquitous file formats like XMP and PDF and its industry standard image editing software.

“It’s one thing to create a spec, have it ratified by industry leaders like our partners, Microsoft, Intel, ARM, Nikon and others. It’s another thing to see it actually adopted,” Parsons said. “… The catalyst to adoption was going to be tools that help people implement the stuff and ensuring that they can do it for free. So you know, no intellectual property, no licensing fees whatsoever, no royalties, just free, true open source code.”